你不知道很多很多的红脖不打疫苗也不戴口罩吗？州长就是给他们说话的
m
mise88
11 天
75 楼
其實可以參考一下，美國在十九世紀就做過類似的事
https://time.com/5952532/vaccine-passport-history/
During a series of smallpox outbreaks across the United States from 1898 through 1903, many states authorized compulsory vaccination, while other leaders sought to use the power of public and private institutions to pressure reluctant Americans to accept the vaccine. A Chicago physician wrote in 1901 that “Vaccination should be the seal on the passport of entrance to the public schools, to the voters’ booth, to the box of the juryman, and to every position of duty, privilege, profit or honor in the gift of either the State or the Nation.” 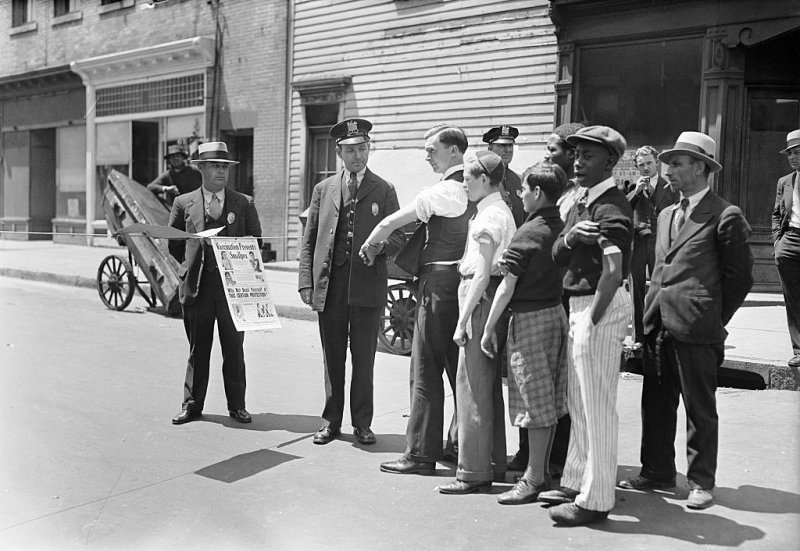 Health officer Jones questions persons before permitting them to pass the quarantine barriers that have been placed at Barclay Street in Newark, N.J., in 1931 to check the spread of smallpox. All entering or leaving must show a vaccination not more than five days old.
Employers across the country acted to make smallpox immunity a condition of employment. Factories, mines, railroads and other industrial workplaces with tight quarters were particularly forceful in demanding proof of vaccination. In 1903, Maine’s government decreed that “no person be allowed to enter the employ of, or work in, a lumber camp who can not show a good vaccination scar. Though workers sometimes resisted, corporations and governments usually ensured that they took the vaccine in the end.
Social gatherings and clubs, too, sometimes required proof of vaccination in order to attend. When smallpox swept through Kansas City in 1921, one newspaper reported that “‘Show a scar’ has been officially adopted as the passwords to lodges and other meetings.” Public school leaders across the country also required students to present a “plain scar, the records of a school or a certificate by a reputable physician” in order to enter their institutions. Among others, the superintendent of the Savannah, Ga., school system in 1897 arranged for students to be provided with “admission cards” to their school once they provided proof of vaccination.
C
ChristinaW
11 天
76 楼

How White Evangelicals’ Vaccine Refusal Could Prolong the Pandemic Millions of white evangelical adults in the U.S. do not intend to get vaccinated against Covid-19. Tenets of faith and mistrust of science play a role; so does politics.nytimes.com
B
Bmhr01233210
11 天
94 楼
回复 85楼飞袖的帖子
就因为出门不戴口罩，才会在外面感染了病毒传给家人。要不然病毒从哪来的？
c
coalpilerd
11 天
95 楼