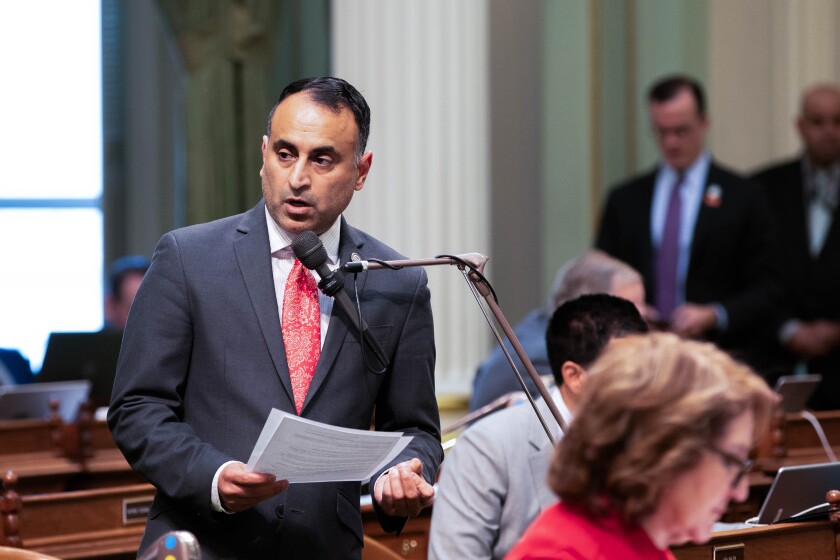 Assemblyman Ash Kalra (D-San Jose), the proposal’s author, at the state Capitol in 2019.(Robert Gourley/Los Angeles Times) BY JOHN MYERSSACRAMENTO BUREAU CHIEF  JAN. 6, 2022 12:32 PM PT SACRAMENTO — California would enact a sweeping, first-in-the-nation universal healthcare plan under a proposal unveiled Thursday by a group of state Democratic lawmakers, providing health services to every resident and financed by a broad array of new taxes on individuals and businesses. Though some of the policy details of the ambitious plan were laid out last year, the way to fund it had not been determined. The proposal, now laid out in separate pieces of legislation, faces significant hurdles in the coming months — first at the state Capitol, with opposition from groups representing doctors and insurance companies, and then possibly at the ballot box, as voters would have to approve the taxes in an amendment to the California Constitution. “There are countless studies that tell us a single-payer healthcare system is the fiscally sound thing to do, the smarter healthcare policy to follow, and a moral imperative if we care about human life,” Assemblyman Ash Kalra (D-San Jose), the proposal’s author, said Thursday. Efforts to create a single-payer healthcare system, in which medical expenses for all residents are covered by a government-run fund, have been widely discussed in California for years. Supporters say the cost of providing care to the state’s residents would go down without the administrative expenses of private insurance plans. ADVERTISING They also point out the costs incurred by Californians under slimmed-down healthcare plans with high deductibles and co-pays — costs they argue will disappear if California creates a state-run program that blends state and federal dollars. “What we’re trying to do is get rid of these dozens of buckets of funding — whether it’s private insurance, whether it’s employer, whether it’s Medi-Cal — put it into one bucket,” Kalra said. Legislative efforts to push the idea forward have fizzled over recent decades, lacking the broad-based political support needed for a historic overhaul of the healthcare system. Kalra’s newest effort was quickly criticized by a coalition of powerful political players, including the California Medical Assn. and the California Hospital Assn. They will square off against one of the single-payer plan’s most vocal advocates, the California Nurses Assn. Assembly Bill 1400 would create “CalCare,” a system governed by an independent board of directors that promises access to any doctor, regardless of network, and a wide variety of medical services. The new entity would push to bring payments to providers more in line with the costs of care and would seek to negotiate lower prices for prescription drugs. The plan includes long-term care coverage and services for senior citizens and disabled people, and would remove barriers based on a patient’s immigration status. ADVERTISEMENT Thursday’s announcement will undoubtedly set in motion a contentious process, possibly complicated by the politics of it being an election year. Gov. Gavin Newsom, who faces reelection in the fall, campaigned for office four years ago in part on support for a single-payer healthcare system. 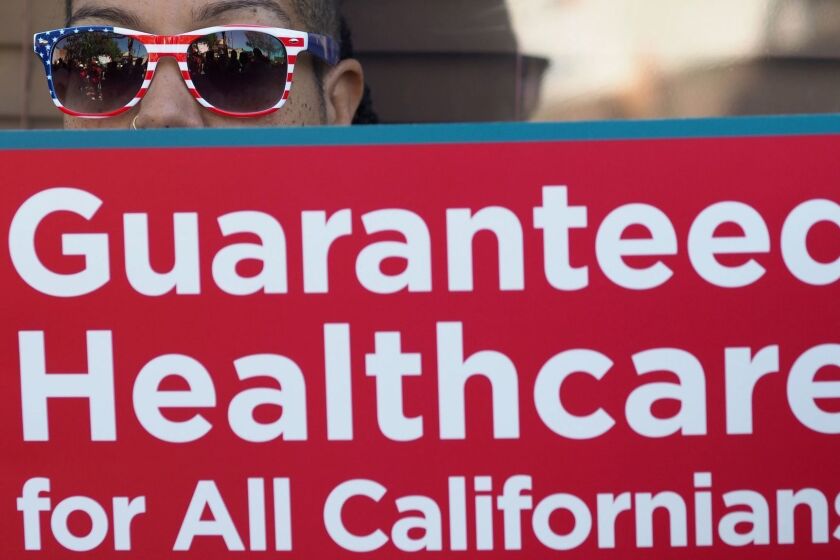 POLITICS How single-payer healthcare became the biggest policy flashpoint in California’s race for governor April 11, 2018 “It’s about access,” Newsom said in a speech at the California Democratic Party convention in 2018. “It’s about affordability. And it’s about time. If these can’t-do Democrats were in charge, we wouldn’t have had Social Security or Medicare.” A spokesperson for the governor didn’t immediately respond to a request for comment on the new effort. But Kalra, a Bay Area Democrat who has lined up support from a group of Democratic lawmakers, reminded those in attendance at a state Capitol event on Thursday of the governor’s campaign platform. “Doing nothing is not inaction,” Kalra said of political promises that have not produced a plan. “It is, in fact, the cruelest of actions while millions suffer under our watch.” The plan’s proposed tax increase might present the most difficult political hurdle: As a constitutional amendment, it would require a supermajority vote in both the state Senate and Assembly and then ratification by voters in either the June or November statewide election. While Democrats have held a supermajority of seats in both houses for the better part of a decade, they have rarely found enough support within their ranks for a broad-based tax increase. The constitutional amendment would impose a new excise tax on businesses equal to 2.3% of any annual gross receipts in excess of $2 million. A new payroll tax would also be created, equal to 1.25% of total annual wages and collected from businesses employing 50 or more people. An additional payroll tax would be required for employers with workers earning more than $49,900 a year. All but the lowest-earning Californians would also be required to pay more in taxes. The proposed constitutional amendment would raise personal income taxes on salaries above $149,509 a year — less for those at that level, more to be paid as income goes up. All Californians reporting an annual taxable income of more than $2.5 million would see a new 2.5% surcharge. And personal income tax increases to pay for the healthcare plan could rise with inflation in future years. The size and impact of the tax increase will be at the center of the debate. Kalra and other supporters insist the taxes will total less than what employers and Californians now pay for private insurance. Rob Lapsley, president of the California Business Roundtable, said the proposal would impose a financial burden on those struggling with the economic impacts of the COVID-19 pandemic, and most Californians can currently receive medical treatment when needed. “California already has near-universal healthcare coverage,” Lapsley said in a statement. “AB 1400 would eliminate healthcare options and force everyone into an untested government-run program.” The constitutional tax increase was introduced this week, while AB 1400 was introduced last year. As a holdover proposal from 2021, it must clear the Assembly by Jan. 31. Republicans were quick to pounce on the procedural changes approved by Democrats on Thursday to fast-track the bill, which has sat for months in the Assembly without any public hearings. “The Legislature’s majority party just voted to move a radical single-payer bill forward without an independent cost analysis,” said Assemblyman Jordan Cunningham (R-Paso Robles), vice chairman of the Assembly Rules Committee. The bill will be considered next week by the Assembly Health Committee. The panel’s chairman, Assemblyman Jim Wood (D-Santa Rosa) said Thursday that he would vote in favor of the single-payer plan, a strong indication the measure will receive a vote by the Assembly where it needs only a simple majority to be sent to the Senate.
e
elee555
14 天
2 楼
好样的，以后有各种慢性病的穷人不需要买保险了，都搬到加州去住就可以了。这样既缓解了全美其它各州的医疗支出，又给加州不断增加新鲜血液，一举两得。
纽
纽约凤姐
14 天
3 楼
加州 真是比较先进啊