The coronavirus pandemic plunged Americans into recession. Instead of emerging poorer, many came out ahead.
U.S. households added $13.5 trillion in wealth last year, according to the Federal Reserve, the biggest increase in records going back three decades. Many Americans of all stripes paid off credit-card debt, saved more and refinanced into cheaper mortgages. That challenged the conventions of previous economic downturns. In 2008, for example, U.S. households lost $8 trillion. 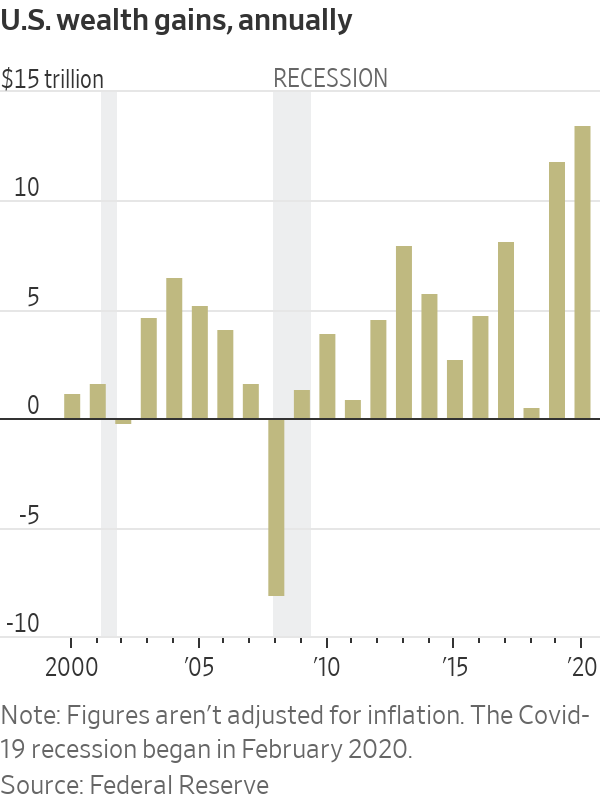 In some ways, the singularity of the Covid-19 recession—and the recovery—shouldn’t surprise. The scope of the pandemic was unprecedented in the modern era.
So was the government’s financial response. The U.S. borrowed, lent and spent trillions of dollars to keep the economy from plunging further than it did. These actions were at the center of the unusual nature of both the recession and the recovery. They have also powered much of the stock market’s unexpected boom. Rock-bottom interest rates lured more investors into stocks; workers stuck at home tried their hand at trading and tech giants gained even more ground during the shutdown.
The stock market, in turn, became the driver of the household wealth gain, accounting for nearly half the total increase. 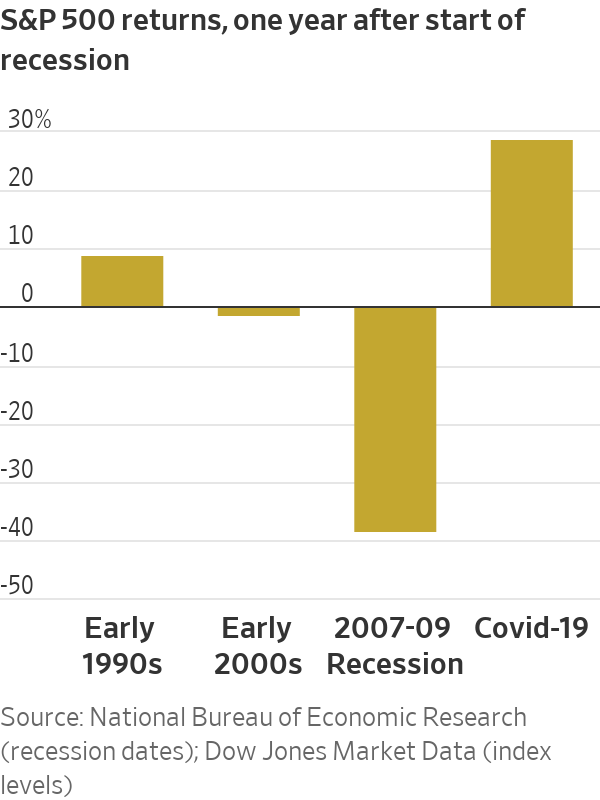 That has produced a lopsided distribution of the wealth gains, since well-off households are more likely to own stocks. More than 70% of the increase in household wealth went to the top 20% of income earners. About a third went to the top 1%.
The gains were even more heavily concentrated at the top when Americans were grouped by wealth instead of income. (Wealth is calculated by subtracting a household’s liabilities—like mortgages and college debt—from assets such as homes and stock-market investments). 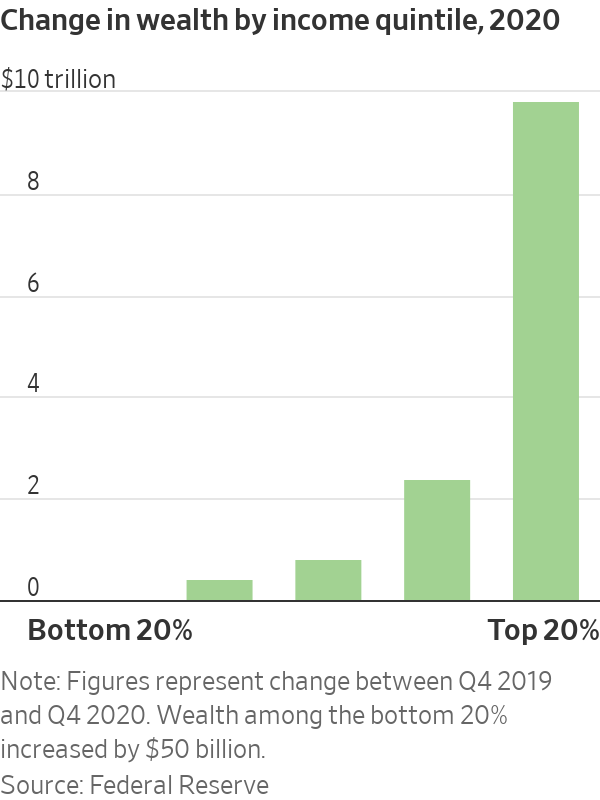 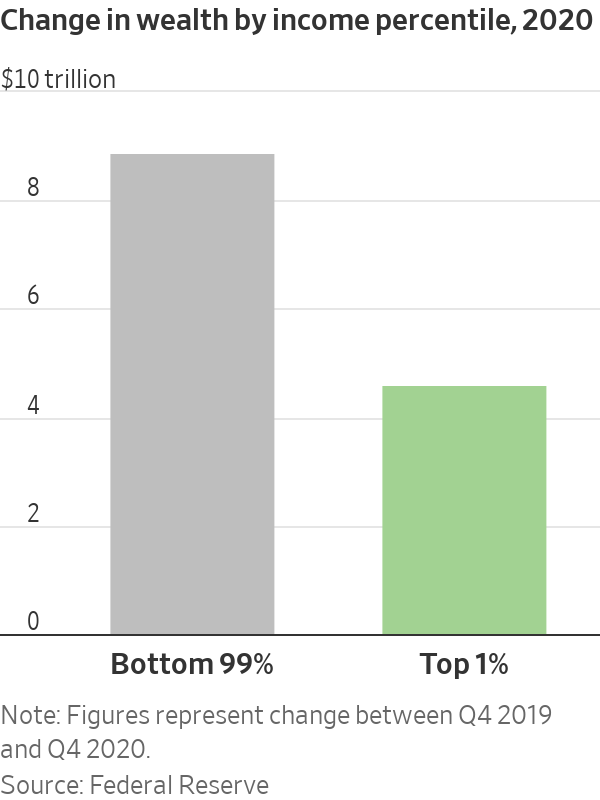 Stay-at-home orders sent the economy into a free fall at the start of the pandemic, but the shock proved short.
Americans with higher-income jobs fared especially well. Many white-collar employees were able to work from home, and they saved money by not commuting or eating out. The government’s stimulus checks and expanded unemployment benefits kept afloat restaurant servers, housecleaners and others in low-wage service jobs who got laid off.
Many lower-income workers came out ahead. By October 2020, for example, household checking-account balances of the bottom 25% of income earners had risen roughly 50% from the year before, according to the JPMorgan Chase Institute. But much of their wealth increase came in the form of stimulus checks and unemployment benefits, which will peter out as the economy recovers.
And many low-wage jobs are still gone. As of April 2021, jobs paying more than $60,000 had grown about 2% compared with January 2020 levels, according to Opportunity Insights, a research group based at Harvard University. Jobs paying less than $27,000 had fallen nearly 24%. 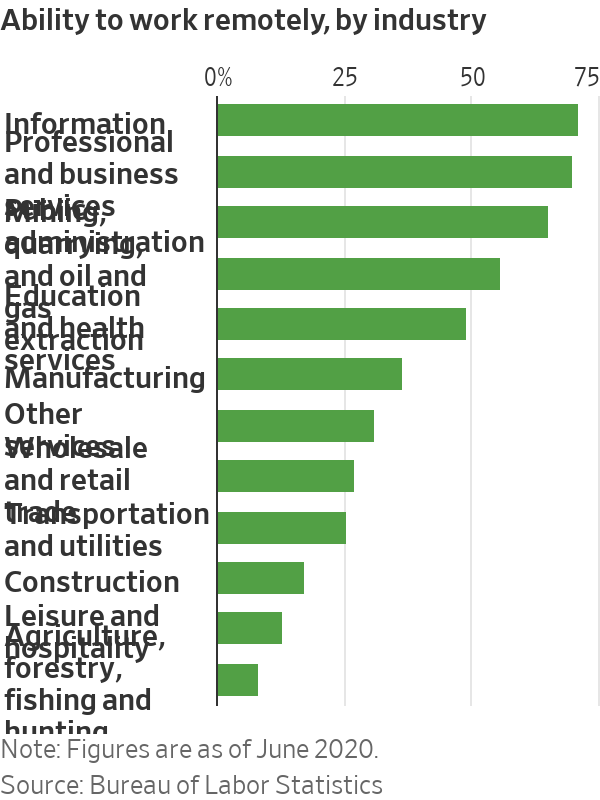 The Americans who gained the most during 2020 were the ones who had much more wealth to begin with. Houses, stocks and retirement accounts—which wealthier people are more likely to own—soared in value, and those boosts are likely to endure. 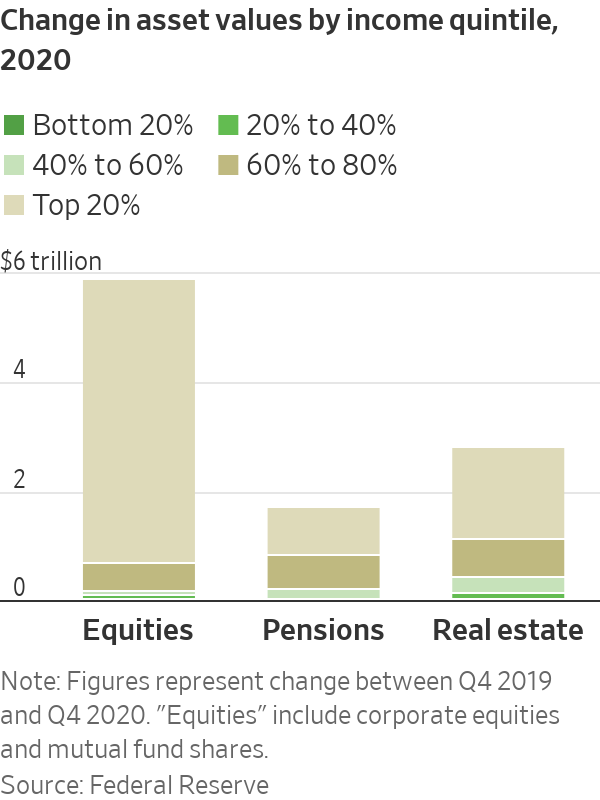 Economists didn’t initially expect things to work out this way. For example, when the pandemic first hit the U.S., stocks spiraled. Then the Fed slashed interest rates to near-zero, launched an array of emergency lending programsand began large-scale purchases of government debt. Investors piled into stocks, no longer fearing that credit markets would freeze. A handful of tech giants, benefiting from a stay-at-home economy, carried the entire market higher.
In the second half of the year, the S&P 500 notched new records on 33 occasions. Rising stock prices accounted for close to 44% of the overall growth in household wealth in 2020.
Home prices, which are prone to fall during economic setbacks, soared instead. Houses were already in short supply, but the pandemic juiced demand and made the shortage more acute.
The median sales price of an existing home surpassed $300,000 last year for the first time and has continued to soar, topping $350,000 in May. The price gains and low rates have been a boon for homeowners, many of whom pocketed cash from their homes or saved money by refinancing into lower interest rates.
The surging prices have also pushed homeownership out of reach for many lower-income families and first-time buyers. Economists expect price growth to moderate in 2021 but not for home prices to fall. 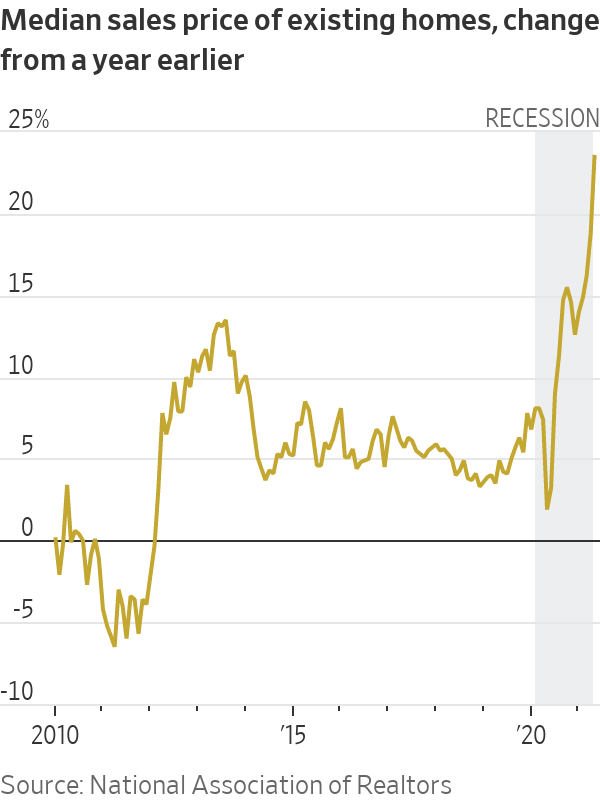 Meanwhile, the aid that helped Americans get through the past 15 months has started to fade. States have begun reducing unemployment benefits. Three months have passed since the last round of stimulus checks. Measures that allow borrowers to postpone mortgage and student-loan payments are set to expire.
Those who missed out on wealth creation during the pandemic will be less equipped to weather the next major strain on their finances. In 2020, more than a third of adults said they might not be able to cover a sudden $400 expense in cash, according to the Fed.