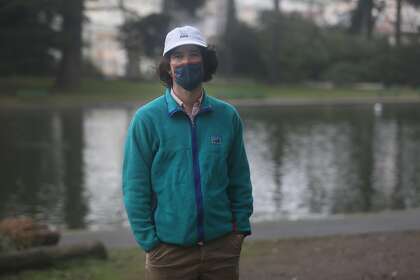 Twilight at Spreckels Lake in Golden Gate Park couldn’t be quieter. Senior citizens chat on benches or circle the lake, canes in hand. Toddlers feed the ducks. And Charlie McCone, on a good day, tries to walk around the tiny lake once.
“It feels like I’m an 80-year-old in not great health,” McCone said as we slowly looped around the lake.
But he’s only 31. A year ago, McCone bicycled 10 miles round trip to his South of Market marketing job at the San Francisco Parks Alliance. He played tennis, soccer and volleyball. He managed the local indie pop band, the French Cassettes. He and his girlfriend socialized a lot — dining out, hitting bars, hiking — and talked about getting married.
And then March 16 hit. And McCone got very sick. He developed chest pain and extreme fatigue. He couldn’t take a deep breath. His lips turned blue. He could barely get out of bed.
“There were definitely nights where I was scared to go to sleep,” he recalled.
He couldn’t get a coronavirus test from Kaiser which, like many health providers, wasn’t testing people at the start of the pandemic unless they were hospitalized, had traveled to countries where the virus was prevalent or had come into close contact with someone who had tested positive for the virus.
By the time he got tested a month later, the result was negative. An antibody test three months after his initial symptoms also came back negative, but he showed me his Kaiser health summary in which his doctor explained that antibody tests are often inaccurate and that he probably did have COVID-19. The symptoms and timing match up. And numerous Kaiser specialists and tests haven’t found anything else to explain his sudden debilitation.
It seems he’s part of a small, but growing, club that nobody would ever want to join. They’re called the COVID-19 “long-haulers,” which means their symptoms linger for weeks or months. Many, like McCone, still aren’t better 10 months later.
As we whipsaw between one fresh horror after another — A pandemic! A terribly slow vaccine rollout! An attempted coup at the U.S. Capitol! A deranged president! — it can be hard to stay focused on avoiding the virus ourselves. Ten months into this misery, many of us are tired of holing up at home. Many young adults in particular are socializing because, chances are, they’ll recover just fine if they get the virus.
But maybe they won’t. Maybe they’ll wind up like McCone, their lives and hopes damaged.
“I don’t think the public is well informed around this possible outcome, and I think if they were, younger folks might exercise more caution and prudence,” he said. “This is just not being well-articulated enough.”
And that’s why he laid out in such detail what life as a long-hauler is really like.
He describes the feeling as carrying a 50-pound backpack at all times — while having a weight on his chest and a bad hangover. Sometimes, just walking to the kitchen elevates his heart rate to 140 beats per minute. He has a hard time talking or staying in any one position for long. He can barely work and is considering quitting the job he loves to go on disability.
He lives in the Outer Sunset just a couple of blocks from Golden Gate Park, but can only get to Spreckels Lake for his walks by driving — something he never would have done before. That’s often his only venture out of the house all day. He hasn’t ridden his beloved bicycle since he got sick. He can’t run.
He said he’s had some nervous breakdowns, pulling his hair out and crying. He and his girlfriend, Katie Purtill, have gone from talking about long-term plans to just getting through the day as patient and caretaker.
Purtill said it’s exhausting caring for McCone, doing all the housework, keeping up with her own job and waiting for a breakthrough that never seems to come.
“There’s no fun part,” she said. “Probably the only enjoyable part of our day is watching Netflix together. I feel like we’re living our senior years now.” 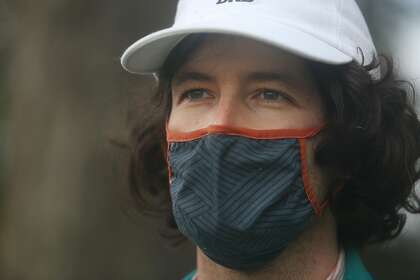 They live together, but haven’t exchanged vows. So what does the future hold?
“I really don’t know,” she said. “That’s the elephant in the room with all this. I love him, and he’s my best friend. I don’t go there too much because if I do, it’s definitely a lot to process.”
McCone said he feels awful that Purtill is shouldering so much on her own. But he doesn’t want anyone else entering their home for fear of reinfection, and he doesn’t have the energy to interact much with others.
“It’s a lot of, ‘How are you doing? Are you better?’ It’s hard to keep saying the same thing which is, ‘Not so good,’” he said.
He hasn’t even seen his mom, Carolyn, in nearly a year because he doesn’t want her driving from her home in the foothills to San Francisco and risk getting sick. But they talk on the phone all the time. She can’t quite believe her son — the very healthy, straight-A student who got a black belt in tae kwon do when he was 10 — can barely function.
“He was always this superachiever, and now his life has just been put on hold,” she said. “I wish they could just give him answers. That’s the worst part. He just doesn’t understand.”
McCone worries that with the current surge, even more people will be left with long-term symptoms of COVID-19 — and there will still be few answers. Several clinics have opened around the country to study and treat long-haulers, including one in October at UC Davis, but McCone hasn’t been able to get a referral from Kaiser to see a doctor outside its system. Kaiser didn’t respond to a request for comment.
Dr. Michael Peluso, an infectious disease doctor at UCSF, is running a study tracking people after they have COVID-19 — and he said the long-hauler phenomena is real, little understood and a major problem for patients and the health care system. There’s little good data about how common it is or when and if people can expect to recover.
“Even if only 1% of people develop persistent symptoms after their infections, it’s still a huge absolute number of people,” he said. “This is not a problem that can be ignored.”
With more than 21 million infections across the U.S., even just 1% would mean 210,000 people potentially with the syndrome. And there could be many more.
Peluso said doctors at the beginning of the pandemic were categorizing patients into two categories: those who survived and those who died. But Peluso said there are many in the “survived” category whose lives have been hugely changed for the worse.
As many as half of people who develop COVID-19 have at least one persistent symptom one to three months later, he said. And there are many previously healthy people like McCone who had mild enough symptoms to avoid hospitalization, but remain sick for much longer.
“The fact that so many people who are experiencing this issue are telling their stories has made the medical community and the scientific community start to take this really seriously, as we should,” Peluso said. “It’s a tough problem. It’s upsetting.”
McCone and I finished our walk around Spreckels Lake in 10 minutes. That was enough for him. He was tired and winded. He climbed back in his car to drive home. Maybe tomorrow would be a better day.