A subconjunctival hemorrhage occurs when a blood vessel breaks open in the white of the eye. It causes a bright red patch in the white of the eye. It''''''''s similar to a bruise on the skin. This type of hemorrhage is common. It can look quite alarming, but it''''''''s usually harmless.
Understanding the conjunctiva The conjunctiva is the thin, skin-like layer that covers the inside of the eyelids and the surface of the eye. It has many tiny blood vessels that bring oxygen and nutrients to the eye. The sclera is the white part of the eye that lies beneath the conjunctiva. Sometimes a blood vessel in the conjunctiva breaks open and bleeds. The blood then collects under the conjunctiva and turns part of the eye red. Over several weeks, your body then absorbs the blood.
What causes subconjunctival hemorrhage? In many cases, the cause isn’t known. But some health conditions may make it more likely. These include:  Eye injury Eye surgery High blood pressure Inflammation of the conjunctiva Contact lens use Diabetes Arteriosclerosis Tumor of the conjunctiva Diseases that affect blood clotting Violent sneezing, coughing, or vomiting Certain medicines that can increase bleeding, such as aspirin or blood thinners  Pushing hard during childbirth Straining during constipation
Symptoms of subconjunctival hemorrhage The main symptom is a red patch on the eye. You may notice it after waking up in the morning. In most cases just one eye will have a hemorrhage. It usually happens once and then goes away. But some health conditions may cause repeat hemorrhages. You may feel like you have something in your eye, but this is not common. The hemorrhage shouldn’t affect your eyesight or cause any pain. If you do have pain, you may have another type of problem with your eye.
Diagnosing subconjunctival hemorrhage Your healthcare provider will ask about your health history. You may have a physical exam. This includes a basic eye exam. Your provider will make sure you don’t have other causes of red eye that may need other treatment.  You will need to see an eye doctor (ophthalmologist) if you have had an eye injury. This doctor might use a special lighted microscope to look closely at your eye. This helps show the doctor if the injury hurt the eye itself and not just its outer layer.  If this is not your first subconjunctival hemorrhage, your doctor may need to find the cause. For example, you may need blood tests to check for a blood clotting disorder.
Treatment for subconjunctival hemorrhage In most cases you will not need treatment. The red patch will usually go away on its own in a few days to a few weeks. It will turn from red to brown and then yellow. There are no treatments to speed up this process. Your healthcare provider may suggest using artificial tears eye drops to help relieve any eye irritation.  If your subconjunctival hemorrhage was caused by a health condition, that condition will be treated. For example, you may need a blood pressure medicine to treat high blood pressure.
When to call your healthcare provider  Call your healthcare provider right away if you have any of these: Hemorrhage that doesn’t go away in 2 to 3 weeks Eye pain Loss of eyesight Another subconjunctival hemorrhage
f
foreverf
大约一个月
3 楼
有没有高血压？ 有没有吃阿司匹林？一般没什么事， 过几天就吸收了。有异物感可能有炎症， 估计等过几天去看的时候， 好得差不多了。
s
singasong
大约一个月
4 楼
别着急，我有次也是眼白上充血，很像二楼里面那张图，什么也没做，过两天就颜色变浅，又过了几天就全好了。 bless MM也很快就好。
g
ganlanshu77
大约一个月
5 楼
这怎么能等，不管严不严重，先让医生看看才能放心啊。
a
aneklb34
大约一个月
6 楼
有没有高血压？？？？？
c
carolasu
大约一个月
7 楼
谢谢楼上的各位mm！没有高血压，也没有吃阿司匹林。 这个已经有段时间了，两三个月吧，那会眼睛里是一团血丝。本来以为是眼睛疲劳，过段时间就好，但一直都没好，于是上个星期开始用了眼药水，且做眼部热敷，血丝消退了一点，然后发现中间有一道很明显的血痕。不知道是感染还是划痕还是别的。
冬
冬日暖阳1
大约一个月
8 楼

如果已经2-3个月了，时间太长了，要考虑这个了。pterygium
What Is a Pinguecula and a Pterygium (Surfer''''''''''''''''s Eye)?
Pinguecula and pterygium are growths on your eye’s conjunctiva, the clear covering over the white part of the eye. Pinguecula is a yellowish, raised growth on the conjunctiva. It’s usually on the side of the eye near your nose, but can happen on the other side too. A pinguecula is a deposit of protein, fat, or calcium. Pterygium is a growth of fleshy tissue (has blood vessels) that may start as a pinguecula. It can remain small or grow large enough to cover part of the cornea. When this happens, it can affect your vision. 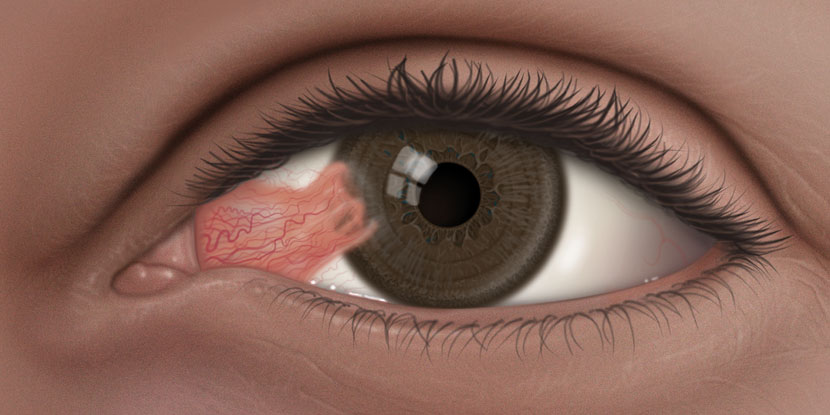 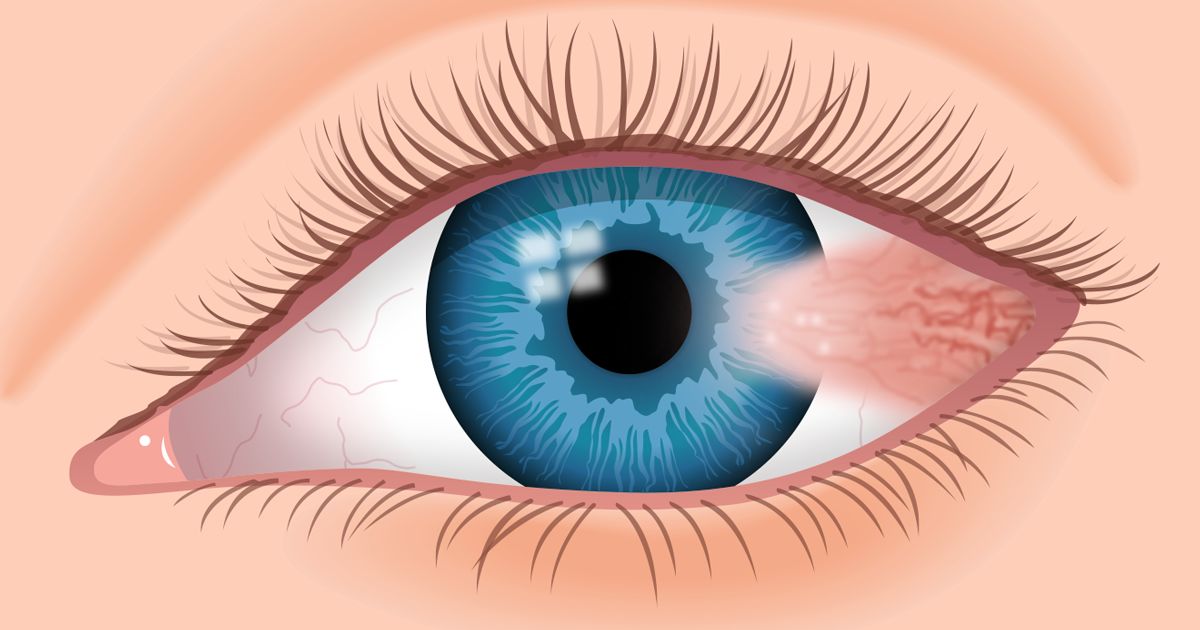 Schedule an exam FIND EYE DOCTOR A pterygium (tuh-RIJ-ee-uhm) is an elevated, wedged-shaped bump on the eyeball that starts on the white of the eye (sclera) and can invade the cornea. If you have more than one of these eye growths, the plural form of the word is pterygia (tuh-RIJ-ee-ah). Though it''''s commonly called "surfer''''s eye," you don''''t have to be a surfer or ever see the ocean to get a pterygium. But being in bright sunlight for long hours — especially when you are on water, which reflects the sun''''s harmful UV rays — increases your risk. Pterygia are benign (non-cancerous) growths, but they can permanently disfigure the eye. They also can cause discomfort and blurry vision. Causes Although ultraviolet radiation from the sun appears to be the primary cause for the development and growth of pterygia, dust and wind are sometimes implicated too, as is dry eye disease. Pterygia usually develop in 30- to 50-year-olds, and these bumps on the eyeball rarely are seen in children. Having light skin and light eyes may put you at increased risk of getting a pterygium. Signs And Symptoms Pterygia usually occur on the side of the eye closer to the nose, but they can also develop on the side closer to the ear as well and can affect one eye or both eyes. Many people with mild surfer''''s eye may not experience symptoms or require treatment. But large or growing pterygia often cause a gritty, itchy or burning sensation or the feeling something is "in" the eye (called a foreign body sensation). Also, these pterygia often become inflamed, causing unattractive red eyes. If a pterygium significantly invades the cornea, it can distort the shape of the front surface of the eye, causing astigmatism and higher-order aberrations that affect vision. Sometimes people confuse pterygia with eye growths called pingueculae, but they are different. Learn more about what a pinguecula is. Pterygium Treatment Treatment of surfer''''s eye depends on the size of the pterygium, whether it is growing and the symptoms it causes. Regardless of severity, pterygia should be monitored to prevent scarring that could lead to vision loss. If a pterygium is small, your eye doctor may prescribe lubricants or a mild steroid eye drop to temporarily reduce swelling and redness. Contact lenses are sometimes used to cover the growth, protecting it from some of the effects of dryness or potentially from further UV exposure. Topical cyclosporine also may be prescribed for dry eye. Even when there is no effect on vision, some people are bothered by the cosmetic appearance. Surgery can warranted for both visual and cosmetic reasons. If pterygium surgery is required, several surgical techniques are available. Your ophthalmologist who performs the procedure will determine the best technique for your specific needs. Pterygium excision may be performed either in a room at the doctor''''s office or in an operating room. It''''s important to note that pterygium removal can induce astigmatism, especially in people who already have astigmatism. Surgery for pterygium removal usually lasts no longer than 30 minutes, after which you likely will need to wear an eye patch for protection for a day or two. You should be able to return to work or normal activities the next day. Recurrence Unfortunately, pterygia often return after surgical removal, possibly due to oxidative stress and/or continued UV exposure.

Exposure to ultraviolet light from the sun is a suspected cause of pterygia; wrap sunglasses will protect your eyes from all angles. These Zyon sailing sunglasses by Rudy Project come with removable side wings for even more eye protection. Some studies show recurrence rates up to 40 percent, while others have reported recurrence rates as low as 5 percent. Some research even shows higher rates of recurrence in those who have pterygia removed during the summer months, potentially because of their increased exposure to sunlight. To prevent regrowth after a pterygium is surgically removed, your eye surgeon may suture or glue a piece of surface eye tissue onto the affected area. This method, called autologous conjunctival autografting, has been shown to safely and effectively reduce the risk of pterygium recurrence. A drug that can help limit abnormal tissue growth and scarring during wound healing, such as mitomycin C, also may be applied topically at the time of surgery and/or afterward to reduce the risk of pterygium recurrence. After removal of the pterygium, the doctor will likely prescribe steroid eye drops for several weeks to decrease swelling and prevent regrowth. In addition to using your drops, it''''s very important to protect your eyes from the sun with UV-blocking sunglasses or photochromic lenses after surgery, since expo
v
vanillaicecream
大约一个月
9 楼
有异物感，担心的话，可以先去urgent care 看。我几年前一觉起来， 一只眼睛出血，不痛不痒，urgent care医生说没发炎红肿，什么药也没用，几天就好了。
p
pangpangbear
大约一个月
10 楼
我以前看电脑多了会想红眼病一样的血丝，4，5天后慢慢吸收掉了。
p
puffyheart
大约一个月
11 楼
长到cornea上的才是pterygium
l
lilymoo
大约一个月
12 楼
pterygium
c
carolasu
大约一个月
13 楼
回复 8楼冬日暖阳1的帖子
还挺像这个的，谢谢mm！
m
mariah
大约一个月
14 楼
中文叫翼状胬肉，一般农民啊，接触灰尘多的还有户外活动多的容易长，不侵犯到角膜不会治疗。严重的话可以手术，不过复发的机会也有。点点人工泪液消炎会舒服一些。