Doctor accused of killing wife has history of reported abuse  (CNN)A Massachusetts doctor accused of killing his wife was arraigned on murder charges in court Monday.
Dr. Ingolf Tuerk allegedly confessed to choking his wife to death after an argument, according to the criminal complaint from the district court in Dedham, southwest of Boston. Tuerk, who went by the nickname Harry, said he and his wife, Kathleen McLean, were consuming alcohol when they began to argue. McLean allegedly hit him on the head with an object and "he reacted to that aggressive situation and choked Katie," the criminal complaint says. 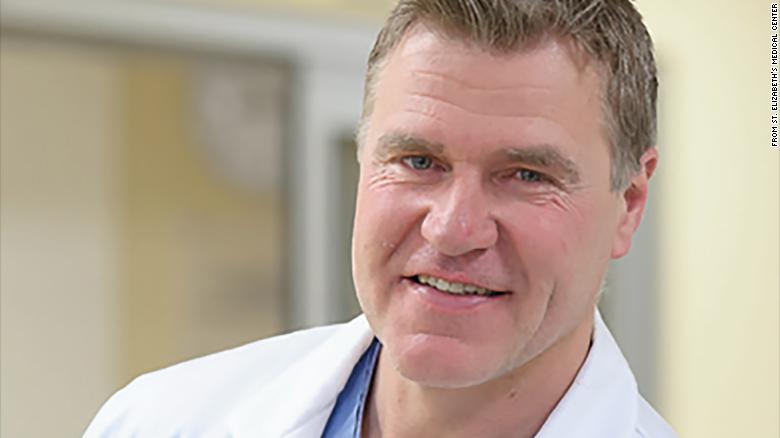 Ingolf Tuerk worked as a doctor of urology at St. Elizabeth's Hospital in Brighton, Massachusetts, before he was terminated in February. Tuerk led police to McLean's body, which he allegedly confessed to placing in a pond near their home, and he may have placed a rock on top of her, police say in the documents. Her body was recovered with several rocks in her pants, police say.
CNN has reached out to his attorney for comment but has not heard back. Tuerk was ordered held without bail Monday by a judge at Dedham District Court and ordered not to have contact with his wife's family. McLean had obtained a restraining order against Tuerk in February after he allegedly cut her hand with scissors, slammed her to the floor and covered her nose and mouth with his hand until she passed out, court documents show. Tuerk was arrested for violating the order two days later, according to records. Last year, Tuerk agreed to pay $150,000 in a settlement agreement to resolve allegations he falsely billed the state's Medicaid program for "portions of surgical procedures that never took place and office visits that he did not attend or supervise," according to the state attorney general's office. He was working as a medical doctor of urology at St. Elizabeth's Hospital at the time. According to spokesman Patrick Lombardo with Steward Medical Group, which operates St. Elizabeth's Hospital, "Dr. Tuerk has not seen or treated patients as part of Steward Medical Group for more than a year. He was formally terminated in February." Tuerk's next court date is June 10.
t
teddysan
7 天
2 楼
越是高压行业越容易出变态…我也只能说到这里了
饼
饼干怪兽
7 天
3 楼