I'm from Hunan, born and raised in Changsha. The only difference between me and others around me, may be my skin colour, which is darker than many.

My dad is from Changsha. My mum is from a small country in western Africa called Benin. I am the so-called mixed race African Chinese. People around me call me black boy in the local dialect. My parents told me their story numerous times when I was a kid. My friends would also get curious, and I'm always happy to share. 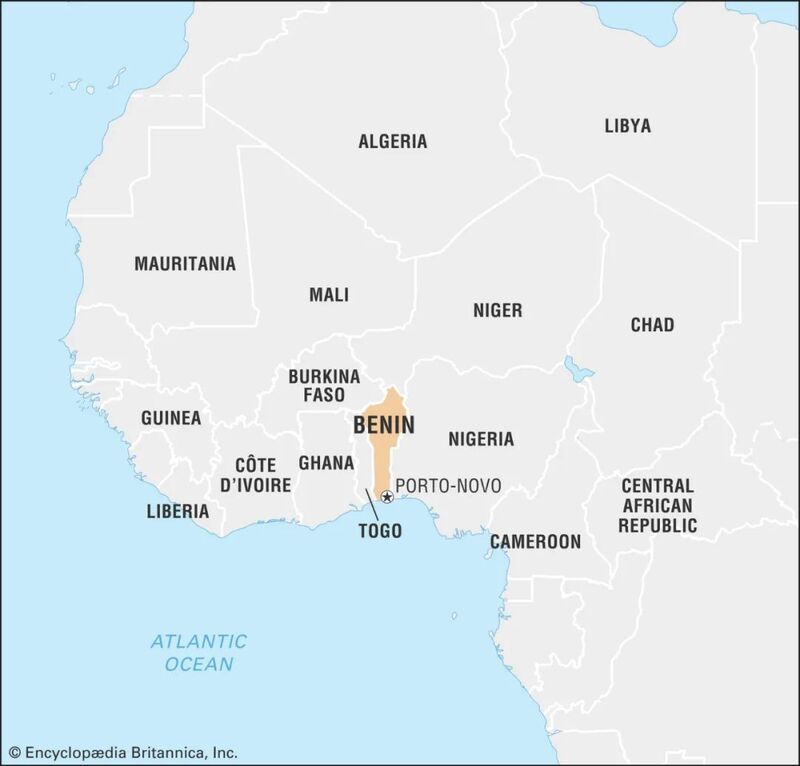 My dad studied French in university. After graduation he got a job in a state owned corporation, then was sent to work in the office in Benin. My mum studied Chinese and accounting in university. After graduation, she got a job in the same Chinese company working as an accountant. So just like that, my parents came from different parts of the world and met in the same company. They met and fell in love, later got married.

After getting married, my parents came back to Changsha, where I was born. From then on my whole family got settled in Changsha. My uncle and several cousins also followed my family to China, where they learned Chinese. My cousins went to university in China. Now they have their own companies and families in other parts of China.

My family culture is mainly Chinese, with Beninese as supplemental culture. My parents speak Changsha dialect at home. My uncle and cousins speak Mandarin. You wouldn't be able to tell we are a bicultural family if you see our family gatherings.

My mum's native language is French and Fon (a local language in Benin). I did learn French when I was little, but I could only do basic conversation. I still have a lot of hurdle in communicating with relatives from my mother's side.

I have only been to Benin 4 times. The last time was when I was still in high school. My mum comes from a huge rural family. She has 5 older siblings. I have more than 20 cousins. Mum was the first university graduate from the family. That's how she got work in Cotonou, the largest city in Benin, and entered a Chinese company.

It was a massive hassle every time we went back to Benin, connecting flights and rides. Besides meeting my grandparents, uncles, aunties, cousins, and also having to meet my dad's old friends. My parents once brough my Beninese grandparents to China to live for a few months. I could only communicate with grandparents up to 30%. Besides, they didn't get used to living in China, and went back to Benin eventually. 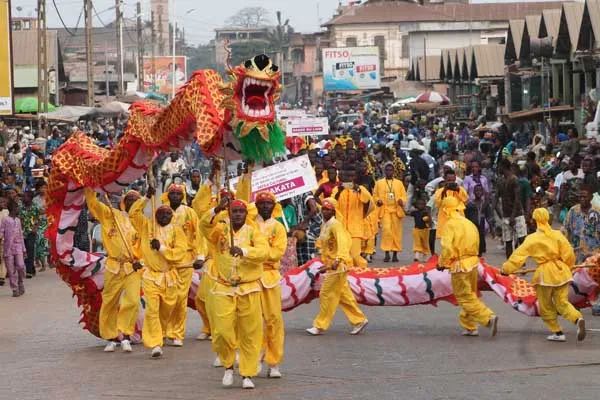 Chinese New Year Dragon Dance in Benin. My cousin's there

From kindergarten to high school, I was always in Changsha. During my 18 years of growing up, my teachers and peers did not really care about my mixed race identity much.

Often classmates would ask me why I was so dark. I'd always answer cheekily, "Well. Perhaps I've been under the sun too much." and laugh.

My dad also said, "If someone insults you because of your skin colour, you have to know that's because he's jealous of you. His grades aren't as good as yours. He's not as popular as you. Skin colour is all he has to attack you."

I have to say, during my upbringing, I never felt the bother of racism and colourism. When I look back on my childhood as a grown man, I think I was lucky and happy. I am grateful to the acceptance of diversity from the people around me, and grateful to the nurturing from my parents. 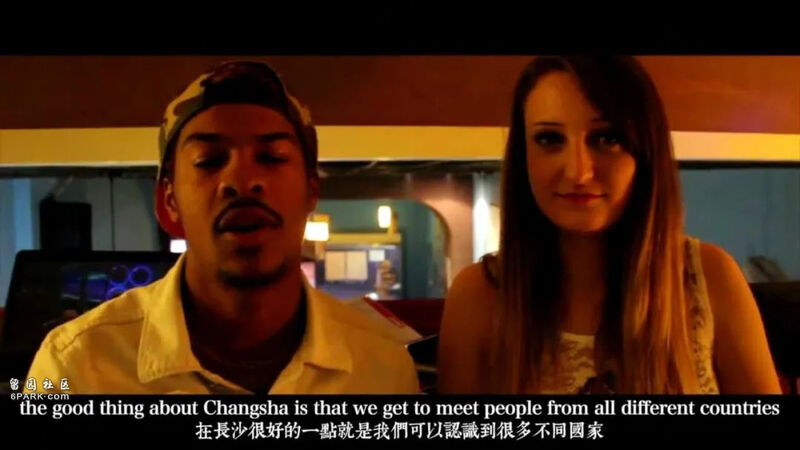 My scores in the National College Entrance Exam were pretty good. I was always interested in humanities and social sciences. I got into Renmin University and became a proud graduate of RUC.

For example, in Beijing, I could tell if someone came from Hunan right away, and I would identify with Hunanese. A friend of mine is also African Chinese. His dad came from Kenya, and he was raised in the Northeast. Then there was a huge cultural difference between his northern culture and my southern culture. We won't necessarily identify with each other.

Another thing is, very often, both Chinese and foreigners would think I was good at English, and would start speaking English to me right away. My English was terrible, as most Chinglish. I started to get better at spoken English after studying in the US for my masters.

I used to post photos online quite often when I was in university. Although my friends around me were really nice, racist comments always came from strangers online. I was never afraid of these racist attacks from strangers, and I would come back in a strong tone.

"You are African, not Chinese. You and your mother should go back to Africa."

I reply "It's not you who decide whether I'm Chinese. My Chinese passport and Chinese ID decide that. My mother and I live a happy life in China. Why should I listen to you?"

I reply "I suggest you go take a DNA test to see whether you are pure bred. We only say cats and dogs are pure bred, never heard of humans calling themselves pure bred."

"Black people have low intelligence. Their nature is laziness and violence. I suspect you got into RUC through beneficial policies."

I reply "My ID states I'm a Han Chinese. No additional points for my exam. I graduated from RUC with a bachelor of management. I was the best debator in the campus debate competition, won the first class scholarship for social activism. I got a masters from UT Austin. How high is your intelligence?"

I reply "I've been with my girlfriend since university. I know many RUC students who date black people. They are not as ugly in the side as you. Even if they're single, they would never date you."

The reality is there are many African Chinese. But once they get on the media, the online abuse and racism will follow. The malicious intent came from nowhere.

His mother is a Chinese doctor working in Africa, and still in Mali. Such a great mother with such a noble job, Yu Hua still cannot escape online abuse and racism.

Translation: Likely someone without a dad

Translation: The average life expectancy in Mali is 40 something. His dad is likely dead. If he's still alive, maybe he's healthy.

Translation: Did she go to Africa to be a doctor? Or to get men?

Translation: Will the Chinese nation still be Chinese with black gene? Are we still Han Chinese?

Facing online racism, Yu Hua made this post, telling the experience of his parents. 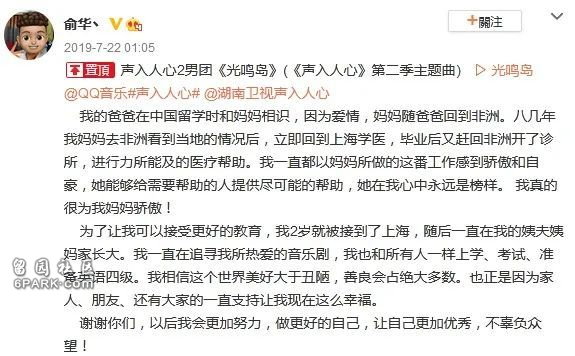 Translation: My dad met my mother when he was studying in China. My mother followed her love and went to Africa with my dad. In the 1980s my mother saw the local conditions, decided to come back to Shanghai to study medicine. After graduating, she went back to Africa and opened a clinic. She did all she could to provide medical help. I have always been proud of what my mother did. She provided help for people whoneeded it. She is forever my role model. I'm proud of my mother.

I was sent back to Shanghai at the age of 2 for a better education. I grew up at the home of my auntie and uncle. I have been pursuing my love for musicals. I go to school, take exams, prepare for English level exams like everyone. I believe this world has more good than ugly. Kindness will be the majority. I have been so happy because of the support from my family and friends. Thank you all and I will work harder to make myself more outstanding. 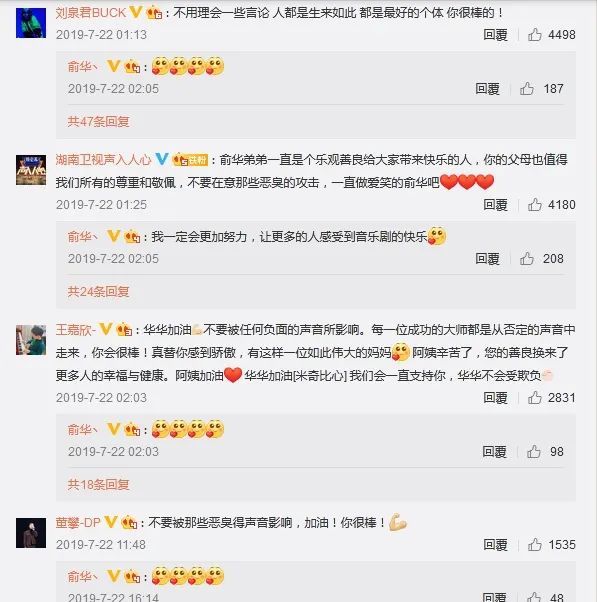 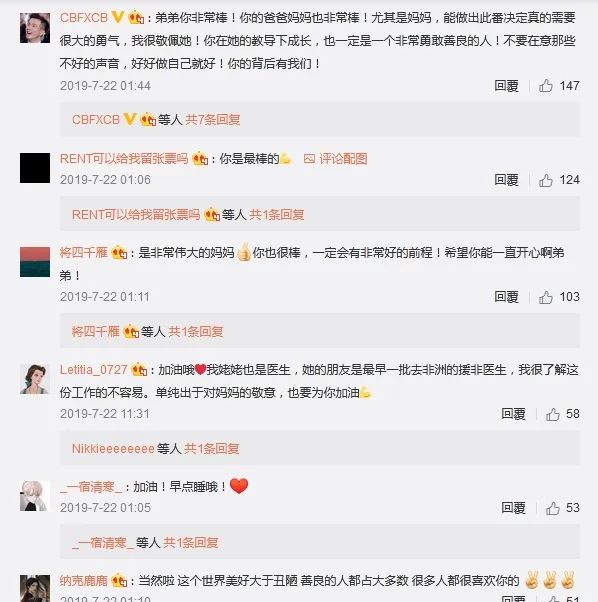 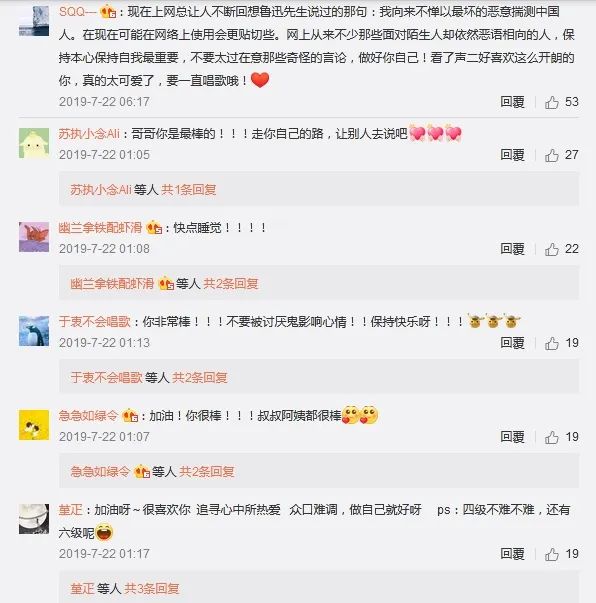 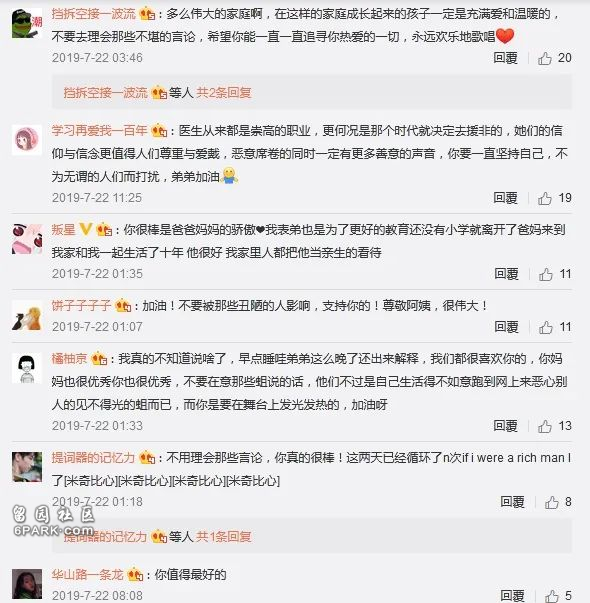 Looking at the comments on Yu Hua's Weibo, the supportive comments are the vast majority. No matter where you look, kindness always trumps evil.

Recently a girl named Zhong Feifei went on a talent reality show. She suffered online abuse and racism again because her father came from Congo.

She grew up in China, and now studies in John Hopkins University with a masters in international security and anti-terrorism. Clearly, she is a gorgeous and super smart girl, but still suffers racist attacks. 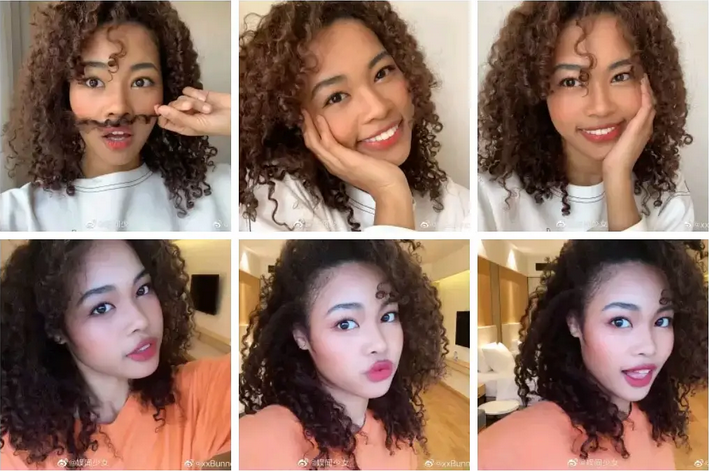 Translation: Go back to your Africa. Thank you. 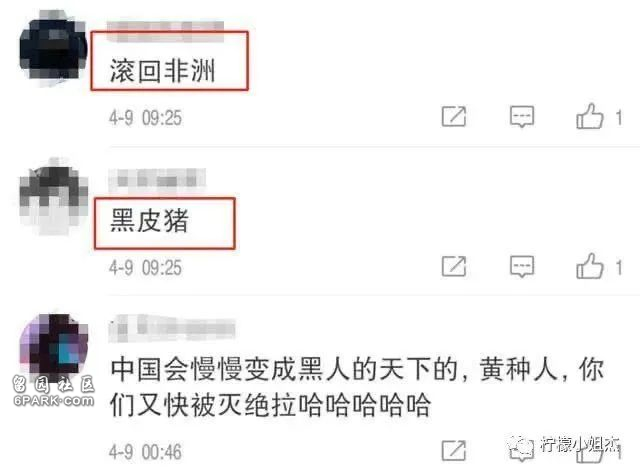 Translation: Fuck off to Africa.

China will be the land of black people. Yellow people will be extinguished. 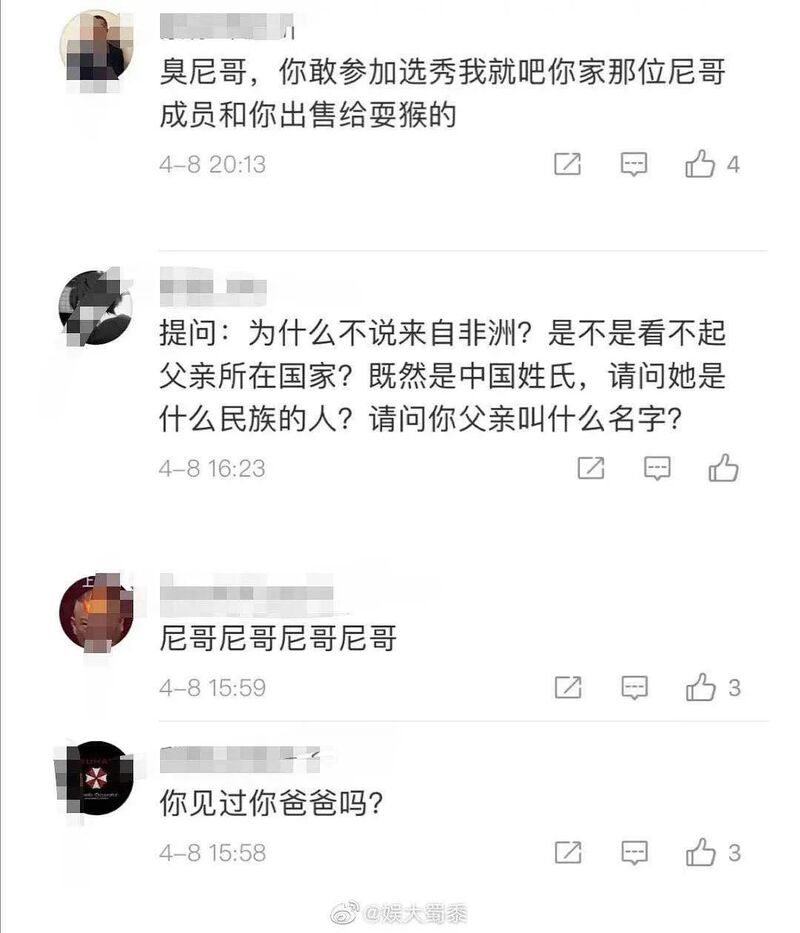 Translation: Fucking nigger. If you dare to go on a talent contest I'll sell you and the nigger in your family to monkey merchants.

Why don't you say you come from Africa? Do you look down on the country you dad comes from? If you have a Chinese family name, what's his ethnicity?

Have you seen your dad? 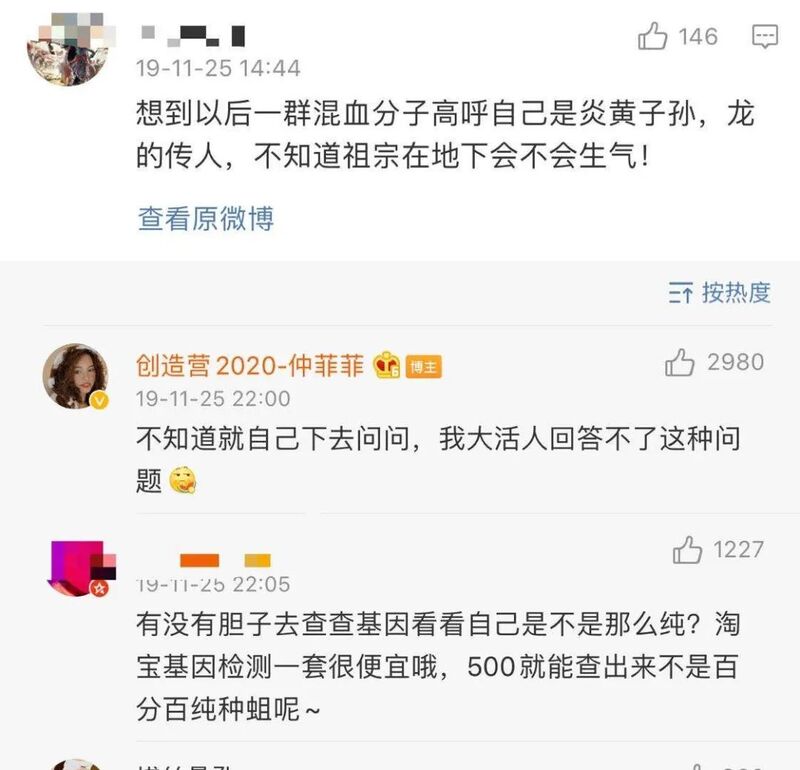 Translation: To think a bunch of mixed race people calling themselves descendants of Emperors Yan and Huang. I wonder if our ancestors will be angry in the underworld.

Zhong Feifei replies: If you don't know that you can go down and ask yourself. I'm alive and can't answer this question.

Of course Zhong Feifei ain't someone soft. Based on her Weibo, she's progressing well in her life, study, and career. Maybe it's really like how my dad says, racist malice comes from your own unhappiness in life, so you're jealous and hateful.

Besides Yu Hua and Zhong Feifei, many African Chinese have been on television.

Nina is from Beijing. Her dad was a diplomat from Guinea Bissau. A few years ago she went on a show, talked about her experience of being stopped at the Chinese border because the customs officers couldn't believe her Chinese passport was real. She often joked about this. 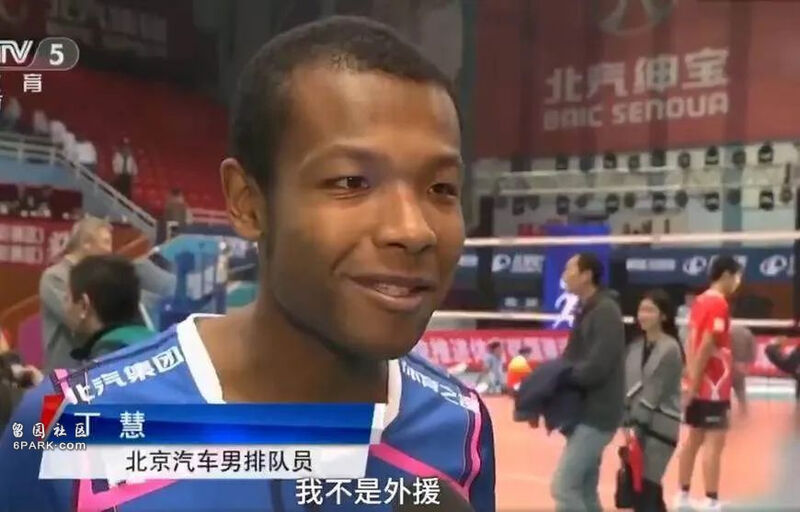 Ding Hui comes from Hangzhou. He's a former member of the China national volleyball team. When he was playing for our country's honour, he suffered a lot of racism and online abuse. He retired at the age of 23, went to America to study and came back to China. Now he's away from the public eye. 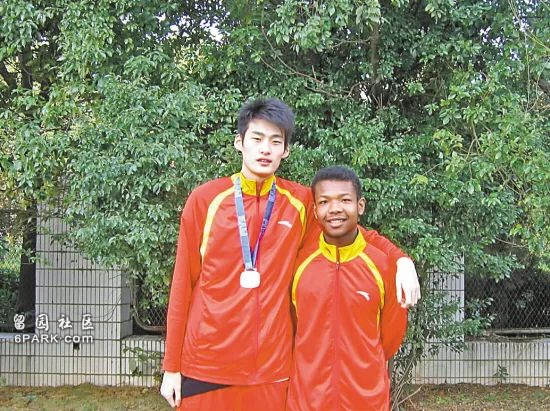 I know a lot more African Chinese. I will not list them here. Some have been on television. Some donot want their pictures public. 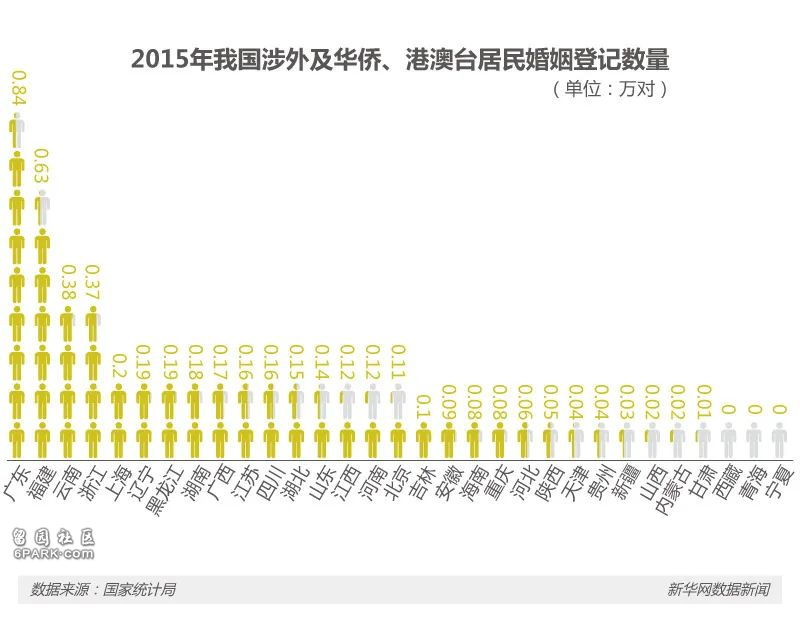 Based on the statistics, there are at least more than 30,000 international marriages every year. Mix race Chinese people are becoming a normality in Chinese society, especially in advanced big cities.

Perhaps the racist people are really unhappy about their own lives, and they need to vent off by directing abusive language at strangers. The racists think most Chinese people are narrow-minded as they are. But Chinese society is more tolerant and loving than they think.

I hope that more African Chinese can face racism and online abuse with heads held high. Like my dad says, racists are losers in life. They have nothing else to say other than attacking my skin colour and parents.

I also hope that more people can know about the presence of mixed race Chinese, especially African Chinese, in the society. I genuinely hope we can gradually drive out racism in the society.