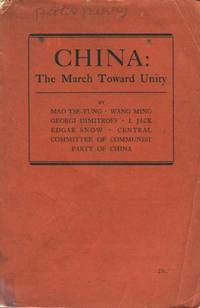 IN THE beginning of July, 1936, I entered Soviet territory in Northern Shensi to seek interviews with leading Chinese Communists and to observe for myself the kind of regime furnished by the Soviet government and the Red Army. Red areas now embrace most of Northern Shensi Shenpei), virtually all of Kansu north of the Sian-Lan- chow highway (Kanpei), including the rich Yellow River valley, and the greater part of Ninghsia south of the Great Wall and east of the Yellow River (Ningnan). There are also small detachments of Red partisans in South Shensi, South Kansu, the extreme Northwest corner of Shansi, Southern Suiyuan along the Great Wall, and in Chinghai West of Lanchow.

The present Soviet regions are the biggest single territory ever occupied by the Red Army. For the first time in Red history the high commanders of the various armies are consolidated in a unified region—Chu Teh, Peng Teh-huai, Hsiao Keh, Lo P'ing-hui, Chang Kuo-tao, Hsu Hsiang ch'ien, Hsu Hai-tung, Ho Lung, Lin P'iao, Mao Tse-tung and Chou En-lai all being concentrated in the Northwest.

I remained in Red China for four months. During that time I traveled the main Red roads in Shensi, Kansu, and Ninghsia, and spent a month with the Red Army at the front. In Pao-an, provisional capital, I interviewed most of the leading Soviet functionaries. My interviews with Mao Tse-tung, chairman of the Chinese Central Soviet Government, and a Red commander, took place always at night. They often lasted till one or two in the morning, Mao retiring very late and frequently doing his heaviest work after midnight—a habit which may be traced to his early career as a newspaperman. Our talks were too long and covered too wide a field to be reproduced here in full, but the following selections, in question and answer form, seem of special interest in relation to current developments.

Chairman Mao knows a little English, which he studied at Changsha Normal College (of which he is a graduate), but for these interviews a returned student, Wu Liang-ping, a young Soviet functionary in Pao-an, acted as interpreter. My interviews were written in full in English, and then re-translated into Chinese and corrected by Mao, who is noted for his insistence upon accuracy of detail. It is interesting to remark that Wu Liang-p'ing is the son of a rich landlord in F'enghua, Chiang Kai-shek's native district in Chekiang, and that he fled from Fenghua some years ago when his father, apparently an ambitious burgher, wanted to betroth him to a relative of the Generalissimo.

QUESTION: Is it the immediate task of the Chinese people to regain all the territories lost to Japan, or only to drive Japan from North China, and all Chinese territory above the Great Wall?

ANSWER: it is the immediate task of China to regain all our lost territories, not merely to defend our sovereignty below the Great Wall. This means that Manchuria must be regained. We do not, however, include Korea, formerly a Chinese colony, but when we have re-established the independence of the lost territories of China, and if the Koreans wish to break away from the chains of Japanese imperialism, we will extend them our enthusiastic help in their struggle for independence. The same things applies to Formosa. As for Inner Mongolia, which is populated by both Chinese and Mongolians, we will struggle to drive Japan from there and help Inner Mongolia to establish an autonomous state